Frank and I met at charity benefit in 1983. After dating for 7 years we married in 1991. Eager to have a family, we were overjoyed when, after years of trying, lovely little Kirsten came into the world. I joined my local mother’s group where I enjoyed bonding with other new mothers. It was in this environment where I first noticed differences in Kirsten’s development. The other children started to crawl, and walk and talk…yet Kirsten didn’t change.

I have a strong sense of humour and take great pleasure in life. This hasn’t always been easy. Frank and I went through a very dark period just after the birth of our second child Eric, which was when Kirsten was diagnosed with Autism.
Frank is Dutch, and we had decided to use both languages, but at 12 months we became concerned that Kirsten was not picking up either language. I consulted an expert in dual languages suggested that there might be something more to Kirsten’s inability to pick up both languages. I consulted my early childhood health nurse who saw no need for concern. Not convinced, I then consulted our paediatrician and was referred to a psychologist.

I held Eric on my lap as we were given the diagnosis for Kirsten. The psychologist told us that the way a baby looked around and at their mother was an indicator of a neuro-typical child, which Kirsten was not. Frank and I looked at each other and realised Eric didn’t look around or at us either. We realised that we were in fact getting a diagnosis for both children that day.

The following year was filled with the joy of being parents and the buckets of tears for the grieving that parents go through when they are told their child, or children in this case, will not become the people they had planned them to be. Having a baby and a toddler is hard work for any parent, but to have this stage go on indefinitely is exceedingly difficult. Both Kirsten and Eric have severe Autism which restricts their social behaviour and communication. Their inability to speak makes understanding what they want very challenging and leads to great frustration for them. They have repetitive behaviours and narrow interests. Kirsten shows constant enthusiasm for the Teletubbies years after other children have moved on to other interests. Both children have sleep problems (so therefore their parents do to) and issues with toileting. The children are not able to make friends like other children, or be cared for easily by family or friends, giving Frank and I very little time out. 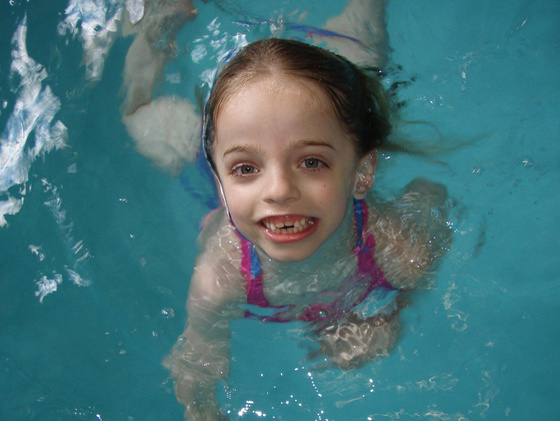 Despite suffering depression I continued to strive for the best outcome for my family.

After Kirsten was diagnosed we began speech therapy and attended an early intervention centre. Learning of the benefits of as much early intervention as possible, I brought both children to swimming lessons.
Swimming assists Autistic children with large muscle development and coordination, cognitive processing, relaxation, building self-esteem, and socialisation. Additionally, I wanted to find an activity my family could enjoy together. I wanted our children to be able to swim to have fun and be safe in the water. The ability to swim means we can go to the beach like a regular family without noticeable differences.

Lessons at Swim 4 All have brought our family together. The kids love it which gives Frank and I great joy.

The day Kirsten swam unassisted to the side of the pool (to get to the ice-cream freezer!) I was astounded. I took my children to swimming lessons for the benefits that they would gain but I never imagined that they would be able to swim on their own. I felt so much pride and adoration at seeing Kirsten achieve such a milestone that other parents take for granted. Since then Kirsten’s constant progress as been an inspiration. In typical Autistic routine she swims well every week and gets an ice-cream every week.

Kirsten’s increase in swimming skills and freedom in the water with her newfound abilities has given her confidence in other areas of her life. As the Swim 4 All program has grown and the pool has become more crowded, Kirsten has coped well with the increase in noise and activity. Now attending Bulleen special school Kirsten can interact with other children, manage taking turns and noisy distractions. All huge progressions for an Autistic child. We lead a very challenging life, but it has been made a little easier to deal with, thanks to Swim 4 All.

About the Author: Natalie

Latest From Our Blog